Molnik is a hill in the hinterland of Ljubljana in central Slovenia that has been known as an archaeological site for quite some time. Systematic investigations ensued in the 1980s and 1990s, led by Ivan Puš, then curator in the Mestni muzej Ljubljana. They revealed ramparts and habitation terraces on the summit of the hill, as well as flat and tumulus graves on five locations around the summit that date to the Early Iron Age and some finds from later periods.

The monograph presents the results of the field investigations and of numerous analyses of the site, which was in the Early Iron Age a frontier post of the Dolenjska Hallstatt community. The content is illustrated with numerous maps, plans, tables and photos, while the body of the small finds is presented in drawn form on the plates.

The cultural and historical assessment of the finds from Molnik improves our knowledge of the time between the 8th and the 4th centuries on the territory of the present-day Slovenia. This knowledge is further advanced by the results of the anthropological, archaeozoological, archaeobotanical and radiocarbon analyses, as well as the spectrographic elemental microanalysis of select items presented in the third part of the book.

The book opens with an outline of the geography of the area and of the settlement picture in the eastern part of the Ljubljana Basin during the Iron Age, followed by a history of archaeological investigations at Molnik. The body of the text first presents archaeological remains in sections: settlement structures, cemeteries, tumuli, graves and small finds that consist of bone remains, grave goods and stray finds.

This is followed by the results of several analyses: of the burial rite (flat graves/graves under tumuli; cremation/inhumation), the form and construction features of grave pits and of the grave goods that comprise costume items, weapons and pottery; the grave goods are assessed both in terms of their typology and chronology, as well as their cultural implications. The analysis of the cemeteries includes the interpretation of the stratigraphic sequence and the time span of individual tumuli and cemeteries. Also addressed is the issue of stray finds that may represent the remains of destroyed graves, but may also be the vestiges of special cult or offering rituals. Attention is paid to the cultural attribution and the social structure of the Iron Age inhabitants of Molnik and the comparisons with the archaeological remains unearthed at Ljubljana and the sites of the Dolenjska Hallstatt group, particularly the important centre at nearby Magdalenska gora near Šmarje-Sap. These relationships are observed both in the grave goods and the funerary rituals. In the latter, Molnik enjoys a special place, as its burial rites and rituals reflect ties both with the inhabitants of the Ljubljana Basin (cremation, burial in flat graves without offerings of weapons) and the powerful Iron Age community of the basin populating the River Krka characterised by inhumation burials in wooden coffins within family-clan tumuli, as well as offering weapons in the graves of their male members.

The book is the result of a fruitful collaboration between the Inštitut za arheologijo ZRC SAZU and the Mestni muzej Ljubljana (MGML). 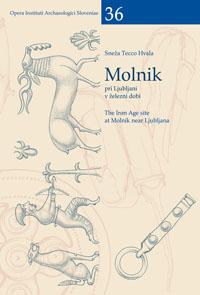