Whenever anyone mentions Ireland, the first things that leap to mind are the rolling green landscape, picturesque castles, and cheerful Irish people hanging out in pubs, listening to good music and drinking Guinness. These are typical scenes from various movies set on the “emerald isle," as the poet William Drennan poetically called it. Ireland has a long and complicated history. Until the end of the Middle Ages, it was characterized by Celtic culture, Viking raids, and the Norman invasion, and the entire Modern Age was marked by the dispute between the British and the Irish over control of the island—and many bloody conflicts between the two. It was only in the twentieth century that the situation calmed down to some extent, and the island was divided into the independent Republic of Ireland and British Northern Ireland. The Republic of Ireland used the advantages of European Union membership to gradually transform itself from one of the group’s poorest countries into a developed one. It started being referred to as the “Celtic Tiger." With the onset of the economic crisis, the Tiger began to visibly weaken. Ireland was forced to ask for international financial aid and adopt strict austerity measures. Nonetheless, there are many reasons for optimism, including increased travel to the island, making it a major European tourism destination.

Slovenians have always enjoyed visiting Ireland. The main attractions are its breathtaking natural beauty, the proverbial Irish melancholy, well-preserved cultural heritage, great music, and good food and drinks—and probably also its turbulent history, in which the Irish, like the Slovenians, were often a repressed nation.

This guide takes the reader across the island following three recommended routes. First Dublin and the surrounding area is presented, followed by a four-day trip through the northern part of the island, and, finally, a suggested six-day tour through the south.

The first travel guide to Ireland was published in 1997; this edition has been fully revised and considerably expanded. 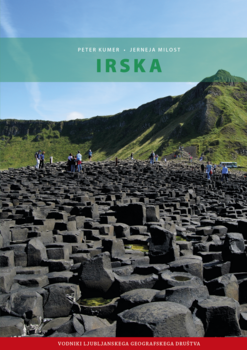