Monograph The Slovenian Literary Science from Trubar to World War II is the lifework of Darko Dolinar, an expert in history and methodology of the Slovenian literary science. His study represents, for the first time in our country in the form of a scientific synthesis, the development of professional and scientific treatment of literature from its beginnings during the Reformation through Baroque and Enlightenment polyhistoricism and the beginnings of national literary history in the 19th century to the establishment of literary science as a basic university discipline in 1919 and the further development of its various subdisciplines, including comparative literature, all up to the outbreak of World War II. Dolinar's monograph is an attempt to eliminate a long-standing gap in Slovenian literary science, since Slovene literary scholars, researchers, teachers, and students of literature need a firm grounding on the historical knowledge of the concepts, significance, development, and previous crises of the discipline, as well, for a more critical response. 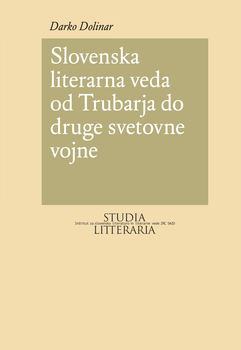