The text-critical edition Turjaška knjiga listin II [Turjak Book of Charters II], containing 436 published documents from the 15th century, completes the medieval corpus of charters from the private archives of the Carniolan comital and ducal lines of the Auerspergs. Published in their entirety, the charters are equipped with Slovenian regests and followed in the end by a comprehensive index of names and pictures of seals from the charters.

The Auerspergs [Turjaški] are among the rare noble families in the Slovenian territory with systematically preserved archives that date back to the Middle Ages. Most archival materials of the family, which was largely embedded in the framework of the Province of Carniola until the end of the 15th century, are presently kept in two private family archives: the Turjak Comital Fideicomiss Archives (Gräflich Auersperg'sches Fideikommisarchiv), first kept in the Turjak Castle until 1942 and now in the Carinthian Provincial Archives in Klagenfurt, and the Turjak Ducal Archives (Fürstlich Auersperg'sches Archiv), which were first moved to the Turjak Palace in Ljubljana and the Lower Austrian Lösensteinleiten Castle and finally ended up in the Viennese Haus-, Hof-, und Staatsarchiv. 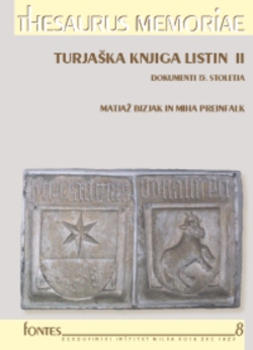