The monograph presents the results of two-year excavations (1982 and 1983) on the late-antique fortified hilltop settlement Korinjski hrib above Veliki Korini in Suha Krajina, where the remains of five defence towers and an early Christian church were explored. The settlement was initially recognized as a military post and as such represented an exception in the Eastern Alpine area. Such a definition raised some doubts and dilemmas. These dilemmas are presented - in addition to geographical outline and research history - in the Introduction.

The following set presents - in text and with abundant graphic material – field reports of excavations of towers, the church, and a small cemetery.

All groups of finds (non-pottery, pottery and coins) and anthropological and archaeological studies are also presented.

An extensive chapter is devoted to the interpretation of architectural remains (towers, church, the fort as a whole).The conclusion also discusses the prehistoric settlement, and the results of structural survey of the ruins of church of St George just below the fort. 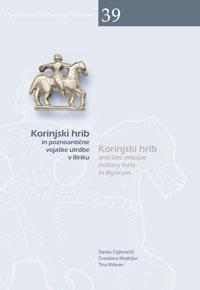