The book of proceedings brings together contributions, submitted to the international conference Mapping the spaces of modernist cities within the context of CIAM's Athens charter, which is result of the applied national project Mapping the Urban Spaces of Slovenian Cities from the Historical Perspective: Modernism in Nova Gorica and its Contexts (L6-8262), financed by the Slovenian Research Agency, Municipality of Nova Gorica and the Slovenian Academy of Sciences and Arts. The papers critically reflect on the Athens Charter, which established the principles of a functionalist city at the 4th CIAM Congress (Congrès internationaux d'architecture moderne) in 1933. The case studies discuss cities, which were newly built in the 20th century in the Soviet Union, Germany, Italy, the Baltic States, Iran and Slovenia, with Nova Gorica at the forefront. They are organized into seven thematic sections, covering a number of previously poorly researched topics: the foundation and establishment of a functional city, the centres of new functionalist towns and the identity of a town, monotony or diversity of modernist residential architecture, the forgotten and decaying industrial heritage, religious architecture in new functionalist towns, monuments in the public space of functionalist city and mapping and visualization of a town. 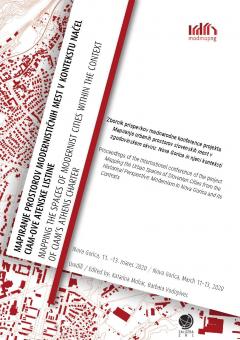