Funerary Monuments in the Interior of the Roman Province of Dalmatia

The present study deals with the question of the organization of the stonemasonry production of funerary monuments in the interior of the former Roman province of Dalmatia. The aim of the research was to identify a model of stonemasonry production that originated in a mountainous and difficult to traverse area, where the possibilities of water transport of stone material are minimal. The author started from the assumption that production centres formed in some geographical areas during Roman rule, using local limestone sources for their operation. The study includes funerary monuments discovered in present-day Bosnia and Herzegovina and in the western part of Serbia and Montenegro.

By combining the methods of macroscopic petrographic analysis of the stone material and typological and spatial analysis, the existence of several production centres was proven. The results of the analyses indicate a very likely that they exploited the local limestone resources. Epigraphic data also made it possible to define their chronological aspect.

The study is essentially divided into two parts. The first presents the results of the material analyses, followed by a typological analysis. The second part contains a catalogue of the funerary monuments.

In the introduction, the basic framework of the study is presented. The next chapter focuses on the result of the macroscopic-petrographic material analysis carried out on the funerary monuments at National Museum in Sarajevo. The main focus is on the interpretation of the results of the material analysis and the attempt to establish a possible spatial relationship between the (limestone) source area and the individual funerary monuments that were the subject of the analysis. Since the study encompass vast study area, the territory was arbitrarily divided into several parts, namely the northern, north-western, southwestern, southern, central and eastern parts of Bosnia and Herzegovina. The typological analysis also presents stelae, cinerary urns and lids that were not included in the material analysis. This slightly extends the study area to the east, where it covers a small part of the stone funerary monuments from the southwestern part of Serbia and northern Montenegro. The analysis in this chapter aims to determine the main types on the three most numerous and best-preserved groups of funerary monuments in the study area, i.e. of stelae, cinerary urns, lids. The chapter analysing the spatial distribution of individual types and subtypes follows on from the previous chapter. Here, the mapping of individual types, subtypes of stelae, cinerary urns and lids is used to spatially delimit the most likely production centres. The results of material analyses are also considered and provide important arguments for the definition of production centers. In the chapter on organization and production process, the author looks for the evidence, which could indicate the organisation of work process, and also focusing onto the relationship between the quarry-based and sculpting workshops and the commissioner. The conclusion lists the main findings of the study and draws attention to the possible production model(s) of those rare funerary monuments that were not produced locally.

The literature is followed by a catalogue of the monuments.

The Slovenian version was published in 2018 in the 9th volume of the series E-Monografiae Instituti Archaeologici Sloveniae. 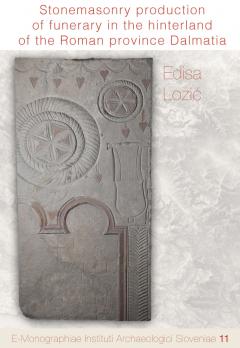