The historical timeframe of the present monograph ('Five Centuries of Writing Poetry in a Military Uniform and Against it 1515-1918')begins at around 1500, the period in which most of the Slovenian ethnic territory was taken over by the Habsburgs and ends with the defeat of Austro-Hungary during the First World War between 1914–1918. This stretch of time is particularly marked by the first printed lines of the Slovenian rebel poem written during the pan-Slovenian peasant uprising of 1515, which is even older than Trubar's Abecedary and Catechism (1550), and the poem depicting the tragic Judenburg mutiny of 1917 for which the leader of the revolt, Anton Hafner, paid with his life.

While the introductory chapter outlines wartime poetry of the first five centuries, the monograph focuses on a five-year period of the First World War, starting with poems and illustrations of the military drills taking place between 1911 and 1914 in Klagenfurt. Their author, Jernej Petkovšek, was sent to the front in Galicia immediately after the drills, where he tragically lost his life only two months into the war.

Vid Ambrožič spent seven years in military uniform, first as a conscript and later as a soldier, and described his life on the front in approximately 270 poems. From 1917 onwards his poems are permeated with motifs of hunger, which stalked not only the Austro-Hungarian armies but also the Emperor. The final touch is a poem documenting 133 days of the siege of Przemyśl, one of the First World War's longest battles between Austria-Hungary and Russia, which was obtained with the help of the current authors of the collection of Slovenian folk tales Glasovi (“Voices”).

While the very beginning of the monograph commemorates the end of the First World War, its ending marks the centenary of the violent torching of the National Hall in Trieste, the establishment of the controversial Rapallo border which, for two centuries, divided the Slovenian ethnic territory, and the disastrous Carinthian plebiscite.

The most substantial gain of the period was the Slovene March, nowadays known as the Prekmurje region, joining the former Yugoslavia or, rather, present-day Slovenia. 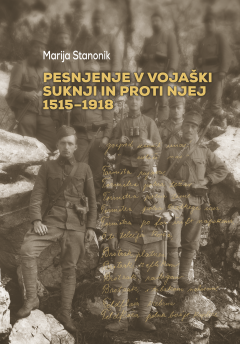