The third publication in which an international group of researchers, under management of collaborators of the Institute of Archaeology at the Scientific Research Centre of the Slovenian Academy of Sciences and Arts (ZRC SAZU) from Ljubljana, studies problems of pile-dwelling inhabitation of the Ljubljansko barje, introduces results of researches performed at pile-dwelling settlements Stare gmajne, Blatna Brezovica and Veliki Otavnik Ib, i.e. settlements dating to the 2nd half of the 4th millennium BC.

Fieldwork and archaeological material as well as a typological determination of pottery from two sites, Stare gmajne and Blatna Brezovica, is presented. Moreover, sedimentological analyses of profiles were performed on the two sites mentioned. On the contrary, dendrochronological researches were completed on all three sites; in combination with radiocarbon dating at Stare gmajne and Blatna Brezovica.

Much attention to extremely important finds and the examination of them is also devoted. Therefore, a wooden wheel with its axle, two logboats and researches of smaller wooden objects, such as different handles and a children's bow are presented. Analyses of crucibles and raw materials were conducted, origins of raw materials for stone axes, crucible, querns, bone and antler artefacts were searched and a research and restoration of the Barje yarn, which is c. 5100 years old and a unique find of its type and age in Slovenia was performed.

The site Stare gmajne near Verd was populated twice, in the late 34th century BC for the first and in the second half of the 32nd century BC for the second time. Settlements were built on marshy ground, most probably on a lakeshore, which also applies to Blatna Brezovica, which dates to the beginning of the 31st century BC. We have also found out that the pile-dwelling settlement Veliki Otavnik Ib and the later settlement Stare gmajne were contemporary. 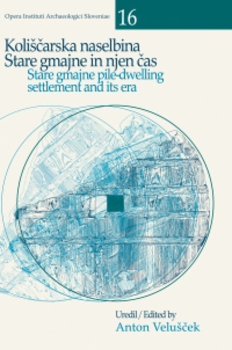