The second part of the monograph on Divje babe I deals in detail with archaeological finds from this important Middle and Upper Palaeolithic site. Edited by Ivan Turk, the monograph contains 17 chapters, written by seven authors.

At the beginning, methods used in research of the site and the stratigraphy of Palaeolithic finds are introduced, followed by six chapters, dedicated to lithic assemblage.

Stone artefacts are analysed from different aspects, including raw material, technology, fragmentation, morphometry, retouch and typology. A distinct feature of the lithic assemblage from Divje babe I is its high degree of retouching. About 80% of the stone artefacts bear alternating retouch which is usually considered as natural, pseudo-retouch. In the case of Divje babe I, it was demonstrated that this kind of retouch is artificial and only exceptionally natural.

One chapter is dedicated to bone and antler artefacts, which were, in addition to the Aurignacian, also found in the Mousterian levels. The most important Mousterian bone artefact is a flute, discussed in three chapters. In the first two chapters, its musical capabilities are analysed, which are also presented in the enclosed compact disc. In the third chapter, authors respond to all advocates of a natural creation of the musical instrument from Divje babe I. They put forward significant old and new evidence for an artificial origin of the holes and provide a reasoned rejection of all the opposing arguments.

A chapter on fireplaces thoroughly analyses seven fireplaces and hearths from the central part of the cave, taking into account all the accompanying finds. Particular attention is devoted to the mass of remains of a cave bear. With the aid of multivariate analysis, it was established that Neanderthals did certain things with its remains. There is surprising similarity between the suspected cult positioning of the skulls of a cave bear pair from Divje babe I and some Neanderthal burials.

A special chapter investigates the possibility of the existence of the hunting of cave bear. There is no convincing evidence of hunting, despite occasional cuts on bones. Analysis shows that people exploited certain skeletal parts of cave bear. The handling of adult cave bear skulls and canine teeth may have a symbolic background.

Other 2 monographs on Divje babe I: 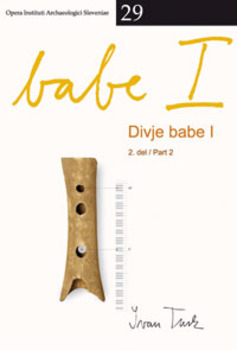