Cvinger near Vir pri Stični is considered one of the most important Iron Age center in the southeastern alpine region. Its importance reflects not only in the size and location in the area, but also in the economic power of the population, which can be seen from the rich artefacts found at Stična necropolises. Until now it was published about Stična a number of scientific papers, articles and monographs, mostly dealing with finds from the graves. They were also presented the results of settlement excavations with international participation in the years 1967 to 1974, but without a comprehensive and in-depth analysis of the pottery. It is now dedicated to this book, divided into three parts.

The first part provides a revision of settlement stratigraphic and chronological sequence, which allows connection between the often elusive settlement and fortification phases and their mostly ceramic material.

The second part of the core of the debate, it is an analytical study of ceramics (method of manufacture, shape, decoration), concludes, however, with a view to the cultural development of the village and chronological frame, as it outlines the ceramic material.

The third part is the catalogue of a representative sample of the presented finds.

22 appendices show cross sections of the tranches with complexes of finds marked. 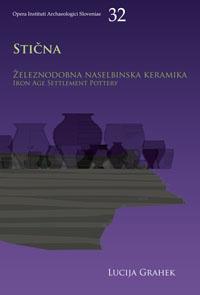