This monograph deals with theoretical and historical aspects of the position of the writer in Slovenia from the end of 18th century, when literature started to differentiate itself from other systems and form an autonomous social system, to the situation in which the writer finds himself at the beginning of the 21st century.

The book is divided into four major sections. The introduction, or section one, outlines and sets up the issues addressed. This is followed by section two, which focuses on the general issue of the writer in the context of the modern critique of authorship that was initiated a few decades ago, especially by Roland Barthes and Michel Foucault, and which has been discussed ever since in the light of new findings in this field. In order to place the theoretical issue of the author into a historical context, this section also deals with the history of the author from Ancient Greece and the Middle Ages to the invention of copyright and establishment of the model of the “Romantic author", which still appears to strongly influence the Western perception of authorship in general. The following two chapters explain the theoretical and methodological framework of the survey. This is a “systemic and empirical" approach, based on the methods of ESL (empirical science of literature) and other methods, especially those connected with Pierre Bourdieu’s literary field theories and Itamar Even-Zohar’s polysystem theory. This framework allows the author to place the entire survey into a systemic perspective, from which the emergence and development of literature is observed as a process of functional differentiation of a special social subsystem. In this subsystem the four action roles, as explained by Siegfried J. Schmidt, are highly interconnected, the role of literary producer being only one of them. Such an explanatory framework demands consideration of a broad range of factors (from socio-cultural to strictly textual) that can have an impact on the role of the literary producer and its historical modifications.

In the third, central section, the author deals with the role of the literary producer in the Slovene literary system. Fourteen cases of individual writers from the 18th to 21st centuries are discussed in detail and organised into a typology of seven models of the Slovene writer. These models are: (1) the writer as national awakener: from priest to layman (Dev, Linhart, Vodnik), (2) the writer between national awakener and artist (Prešeren), (3) the writer between the emerging literary system and national politics (Jurčič, Trdina), (4) the artistic writer (Cankar, Kveder), (5) the avant-garde writer (Podbevšek, Kosovel), (6) the dissident writer (Kocbek, Jančar) and, finally, (7) the writer between artist and producer (Muck, Pisk). The case studies devote special attention to historical and cultural backgrounds, the development of literary institutions (especially publishers, the book market, literary reviews, and newspapers) and the changing images of literary producers as viewed by the authors themselves as well as those of broader society. Special attention is also paid to the autonomisation of the literary system and to the process of establishing its specific conventions.

One of the important types of writer in Slovenia – which is also a more general feature of Central and Eastern Europe – is the strong model of the dissident writer, closely connected with issues of political domination over the autonomy of literature as exerted by a communist government. This type of a writer appears to gradually dissolve in the plurality of a democratic political system with a capitalistic market, a process in which the writer of literary texts – once almost a national prophet – tends to become solely a cultural producer.

In the concluding section, the problems that the survey dealt with in case studies are treated diachronically in three major clusters. The first of these is the autonomisation of the literary system, which addresses the dominant constraints on this process in various historic periods, forms of censorship, and the problem of the “Slovene cultural syndrome", a stubborn thesis that appears to be in part a historical fact and in even greater part an influential ideological construction. The second cluster is the professionalisation of the Slovene literary producer, which recapitulates the history of institutions that mediate literature and deals with the issue of authors’ fees. The final cluster deals with the evolution of perceptions of Slovene writers’ social role and status throughout history, and the status of contemporary authors of literary texts. 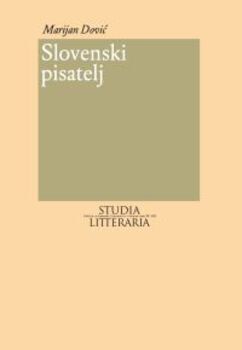