In the last few decades, comparative literature has spread even to those parts of the world that it had not reached before. However, at the same time it has faced a crisis in its traditional centers across Europe and North America, which has shaken its conceptual premises, theoretical foundations, and methodological structure, affected its inclusion in university and scholarly institutions, and jeopardized its social status. The discipline responded to this fundamental change through increased self-awareness and a true flourishing of relevant production directed towards fundamental reflections on its identity, the current situation, its genesis, and possible future paths.

Slovenian comparatists have also participated in this line of thought. Some recent results of their work are presented here together with the contributions written especially on this occasion by prominent representatives of the international scholarly community.

The volume focuses on two central themes. The first one is meant to mark the 100th anniversary of the birth of Anton Ocvirk (1907–1980), the founder of Slovenian comparative literature as an independent scholarly discipline: the papers in the first section discuss Ocvirk's academic works and public activity and attempt to place him within Slovenian and European comparative literature. The second central theme involves a variety of issues, which have been also implied in the contextualization of Ocvirk’s comparatism: the relationship between comparative literature and related or competing methods, schools, and disciplines; the conceptual and subject-specific definition of world literature, and seeking the most appropriate procedures for treating it; characteristics of certain “small" comparative literature schools comparable to the Slovenian school; and ideological, epistemological and methodological issues of literary history. The broadest common framework includes the awareness of the contemporary plural or crisis state of comparative literature, the promotion of its independence in the future, and efforts to renovate it on the basis of critical self-reflection. 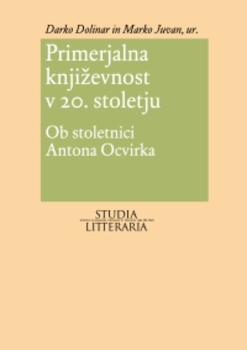