This monograph presents the results of archaeological investigations of the Late Antique fortified hilltop settlement Tonovcov grad near Kobarid. This settlement is one of the best preserved Late Antique settlements in Slovenia and the southeastern Alpine area.

In the first chapters, the geographical position and the research history are presented. Following are the overview of archaeological sites in the Soča River valley and the road network in Late Antiquity.

Investigations, performed between1993 and 2005, revealed the remains of three early Christian churches, some dwelling houses and a water cistern. The book presents the stratigraphic situation and the settlement phases in all excavation areas (building 1, buildings 2 and 3, ecclesiastical complex, water cistern) as well as their dating. The first Late Antique settlement phase started in the middle of the 4th century and lasted to the first decades of the 5th century. Due to the strong building activities at the beginning of the 6th century, the buildings of the first phase were poorly preserved, however many small finds were found. The life in the settlement reached its peak in the 6th century. Buildings 1 and 2 and an ecclesiastical complex of three connected churches were built. The quality of the preservation of the churches enabled a broader study of early Christian architecture in the eastern Alpine and Adriatic area.

The settlement is placed in the broader framework of the western Slovenia and Friuli in the Late Antiquity. In the second half of the 4th century it represented an important part of the Late Roman defence system of Italy and in the 6th century this was a religious and administrative centre of the autochthonous inhabitants in the Soča River valley. 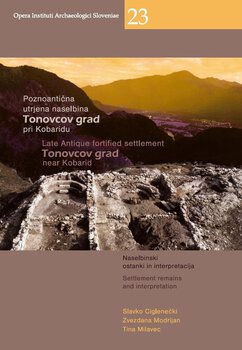