Sixty-year excavation (1953 to 2013) of Župna Cerkev Cemetery in Kranj unearthed almost 3000 graves. The monograph introduces 1048 graves found between 1972 and 2010. The excavations were initially led by Andrej Valič, the curator of the Gorenjski muzej (1972 and 73, 862 graves). Milan Sagadin from ZVKD Kranj continued the dig from 1984 to 2001 (163 graves), followed by Draško Josipovič (Megalan Skupina, d. o. o., 2003 to 2010), who excavated 23 more graves. An extensive chapter presents the artefacts of Župna Cerkev Cemetery with no data about their location.

The varied documentation, which has changed over the years, is the basis for the publication of all available data on the graves and artefacts kept by the Gorenjski muzej in Kranj. The introduction, a study on the nature of the data, comments on possible inconsistencies between the various types of documentation. Primarily it deals with the question of reliability of individual grave good assemblages, which is the basis for all further analysis.

The discussed group of graves originates mainly from the northern exterior of the church and from the interior of the present-day church, that is, from the place where graves intertwined with the remains of older church and non-church buildings. Their building development and changing usability will be impossible to explain without good knowledge of the cemetery. 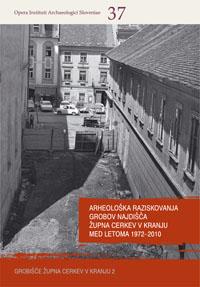